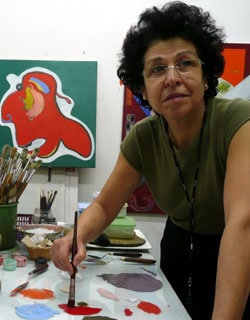 Eva Bosch is a Catalan painter born in Barcelona. At present she lives and works in London with regular sojourns in her atelier in Montmany-Figueró (Barcelona). She combines her studio work with lecturing in the history of Art.

“I grew up in Montmany-Figueró; a small village north of Barcelona where the novel “Els Sots Ferestecs” (Dark Vales), written in 1901 by Raimon Casellas takes place. This village, has haunted me all my life and it has been a great source of inspiration for my work. At present the book is being translated to English by Alan Yates in collaboration with me. Catalan Modernism in literature, initiated by Casellas is unique and particular to Catalonia. It extended to architecture, music and painting. It was a source of inspiration in the work of Antoni Gaudí, Joan Miró, Pablo Picasso or Salvador Dalí. My cultural background constantly nourishes my work. Cultural identity is to me the core of any form of universal Art. Joan Miró once said that he would like to be seen as an international Catalan; I would also like to be regarded in this way.

Like my father, I have always had a wide range of interests. He had to be a polymath and a jack of all trades to support a large family during Franco´s Spain. I was privileged by comparison.

Since my arrival to the United Kingdom in 1973, I benefited from several awards and scholarships provided by a generous, now long gone, British welfare state. I obtained an M.A in fine Art Painting at the Royal College of Art where I was granted an award to study at the Rijksakademie van Beeldende Kunsten in Amsterdam.  In 1995 I won the Pollock Krasner Award. I have had residencies in Italy, France, Spain and Taiwan.

In the last fifteen years I have researched prehistoric painting in Europe as well as in residencies in Senegal and Turkey. In Catalhöyük, www.catalhoyuk.com a city in Anatolia dating from 9000 years ago, I worked next to archaeologists and scientists.

The study of prehistoric paintings has reinforced my belief that the urge of mark making does not change through millennia. The marks left behind by an individual portray a moment in time expressing an emotion or a need.  What gives them value is the feeling they arouse which is universal, but like fingerprints is different for every viewer.

The post-modern world is saturated with highly sophisticated technology.  As a result, the modern artist faces an immense challenge.
The difficulty lies in holding on to one’s personal raft while sailing the ocean of possibilities and bringing to shore something alive.”